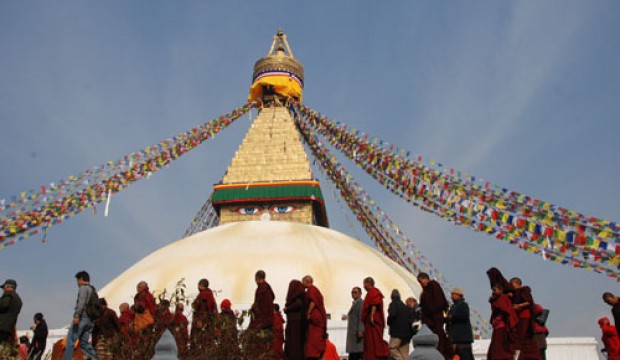 Lord Buddha was born in the western Nepal. This is the place belongs definitely in the Buddhist pilgrimage Tours in Nepal, Lumbini is the most famous destination for visited.
Buddha, An idol of peace and harmony all over the world since two millennium. King Suddhodhana and queen Maya Devi gave birth to a child called Siddhartha Gautam some 2500 years ago as a crown prince of kingdom of Kapilvastu, Lumbini. The little child latter known as Lord Buddha throughout the world. Lumbini the birth place of Buddha is greatest pilgrimage site for Buddhist around the world. It lies some 300 km southwest of Kathmandu near the border of India. There are many sign and symbol of Buddha’s childhood days still in existence around the Lumbini garden. There are hundreds of thousands of Buddhist around the world these days. Every Buddhist soul wants to visit Lumbini and other Buddhist pilgrimage site in Nepal once in life time. Being the birth land of Buddha there are lot to offer in Nepal. This tour is carefully made to cover all important Buddhist sites and beautiful Himalayan view point. Lumbini itself very sacred place, it houses a small pond where Buddha was bathed after his birth, image of young Buddha with his mother, a stone pillar was erected by Indian emperor Ashok to mark the importance of the site. Along with Lumbini and surrounding area, in Kathmandu we visit Swyambhu Nath the oldest stupa in the world, which was found some 2000 years ago, Bouddha Nath the biggest stupa in the world, pherping, NamoBuddha etc.